In July, I was invited to give two workshops on living without plastic at the Seed Festival at Hawkwood College, near Stroud. This beautiful, small eco-festival aims to inspire a more intimate and personal connection with the world and our place within it. It featured ‘green’ speakers, movers & shakers, musicians, poets and artists. The invitation coincided nicely with the global plastic-free-July campaign.

In order to gain some practice for the Seed Festival workshops I hooked up with Transition Stroud to organise an evening workshop for anyone interested locally. Expecting a small group, I prepared a slideshow and planned to make toothpaste and deodorant together with whoever came along. To my complete amazement, over 50 people showed up and squeezed into the small venue. We had a fantastic, lively evening with people of all ages asking great questions and scrutinising the various plastic-free household items I had brought with me. The evening was followed by a public meeting in Stroud which resulted in a new action group being formed, to tackle reducing single-use plastic in our area. Four of the participants joined the plastic-free July campaign and have joined the new Stroud action group as core members. At the Seed Festival, I was once again bowled over by interest the workshops generated where, in total, some 80 people or so participated. For one of the workshops we migrated outside, as the allocated room was too small.

I am encouraged by the seemingly high number of people who want to change our reliance on plastic packaging and who want to be proactive. The number of people immediately taking some form of action when we talk about it makes me think that this ‘movement’ is ready to gain momentum and spread more widely. The thought of causing ripples far beyond our community makes me excited about how new habits can take off and become contagious. I couldn’t have thought of a better way to spend a plastic-free July.

Thank you to my friends Katie from Hawkwood College and Erik from Transition Stroud and also to my husband and sons for their support and participation. 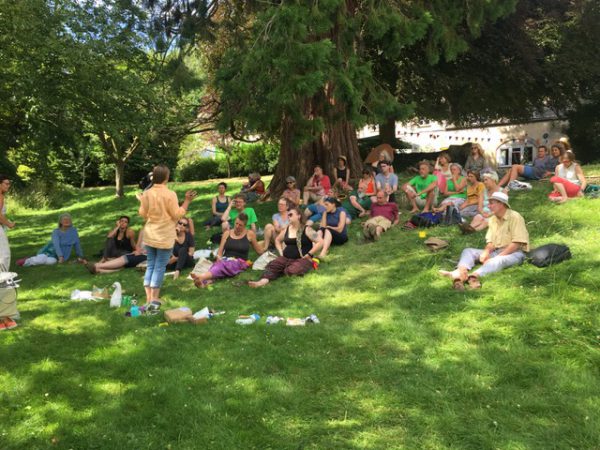 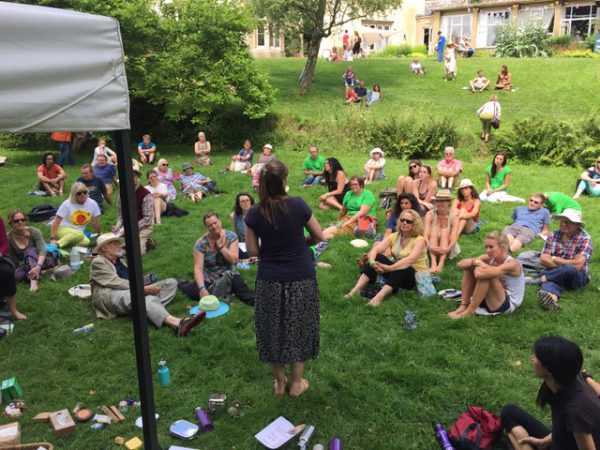 It’s a must-do but is so easy to forget: always refuse plastic drink straws. If you’re unaware of the environmental impact caused by the trillions of single-use plastic drink straws that are discarded after one use and if you have missed the fantastic campaigns such as One Less Straw and others, then please have a look at the links below. A fun and stylish alternative are straws made from metal, bamboo, paper, glass or even silicone. They are easy to take with you when out and about with friends or on holiday. You can have a selection at home to show off your non-plastic credentials. The ones I bought (from local Stroud Valleys Project shop) are stainless steel and come with a dinky little brush for cleaning. I see that they are also available on Amazon from about £5 for 4 straws. Have a great summer everyone! 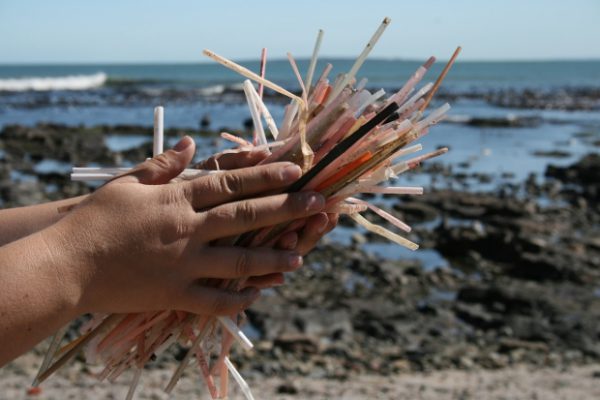 We have just reached our first anniversary of creating a plastic-free household. During the past year we concentrated mainly on unpackaged food, cleaning materials, toiletries and plastic-free clothing. We have collected every scrap of plastic packaging that we have accidentally, or otherwise, brought into the house. This has amounted to roughly one large bagful of plastic packaging from medical supplies, items that we bought which had hidden plastic packaging inside, presents that were given to us, and also from items that seemed unavoidable. Considering that UK households produce an average of 56kg of plastic packaging waste a year, our one bag weighing no more than a couple of pounds represents a great achievement.

In reality, our single-use plastic footprint is much larger than the household figures measured by Defra and in our case, it is bigger than the single bagful collected over the course of a year. Much of our plastic waste is created outside the home, for example in the workplace, at school, in restaurants, at the petrol station, at the hairdressers, at the gym, and by pursuing hobbies and other pastimes that take us outside the home. In the supply chain of the goods I conscientiously buy ‘unpackaged’, there are unknown quantities of plastic packaging. We are not the only ones in the dark: at a recent talk given by Tesco on food waste, which I attended in Oxford, I learned that all of the large supermarket retailers “currently don’t understand or know enough” about the plastic packaging waste in their supply chains. This means that the plastic packaging that each of us is ultimately responsible for is not just in our bins at home.

Over this past year I have read report after report, attended events, talked to many people and the story is the same everywhere. Most people think there is too much plastic in their lives and that we should recycle more and develop new materials to replace plastic. However, few talk about the one solution that is surely staring us in the face. The one solution that could prevent further environmental crises and help restore local communities is ethical consumption. Ethical consumption means that you choose only what you need, what has been paid for fairly, what has been made to last, and what has been produced sustainably without hurting people, animals or the earth. I might not be a shining example of the perfect ethical consumer yet, but I am immensely interested in becoming one. It seems to be one of the few things in life that is actually within my power!

If you are going to watch a documentary this weekend, make it this one!  Sky News Ocean Rescue have produced an excellent 45 minute special report, first aired on TV in January 2017, with the latest research from the UK and abroad. Intelligent, accessible and to the point – be prepared to feel crushed, moved and called to action all at the same time. It also makes you realise that there are a lot of amazing and inspiring people out there. If you have kids, do watch it together. Read more about Sky News Ocean Rescue here.

‘The Smog of the Sea’ by Jack Johnson

The Smog of the Sea chronicles a 1-week journey through the remote waters of the Sargasso Sea in search of the infamous “garbage patches” in the ocean’s gyres. it is beautifully shot and accompanied by Jack Johnson’s lovely music. Marine scientist Marcus Eriksen invited onboard an unusual crew to help him study the sea: renowned surfers Keith & Dan Malloy, musician Jack Johnson, spearfisher woman Kimi Werner, and bodysurfer Mark Cunningham become citizen scientists on a mission to assess the fate of plastics in the world’s oceans. A mesmerising and very interesting 30 minute documentary. 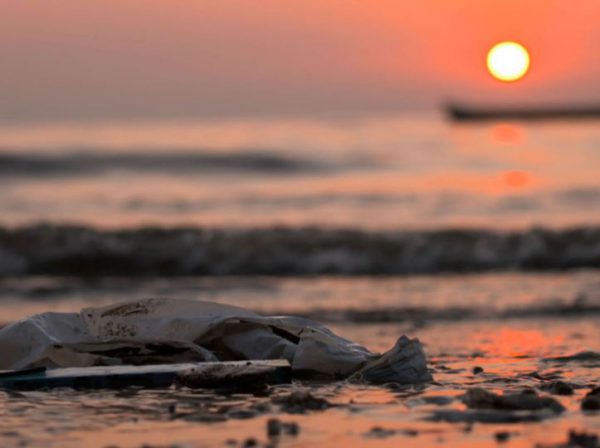 We recently went on a little field trip to two of the most beautiful beaches in Devon to look for nurdles. Prompted by the recent news of record levels of plastic nurdles being washed up on UK beaches (127,500  were found on a 100m stretch of beach in Cornwall alone) we wanted to see for ourselves. Nurdles are tiny plastic pellets used as raw material for almost every plastic product on earth. An estimated 113 billion kilograms of nurdles are produced every year. The extensive spillage of these pellets during transport on ships, trains and trucks has become a massive environmental problem. Campaigners estimate that up to 53 billion pellets escape into the UK’s environment each year.

The beaches we chose for our field trip are remote and pristine, with white sand and a beautiful surf rolling in from the English Channel. My husband and his sister played here as children. Our own children grew up exploring the rock pools and fishing just off the coast. There is an estuary dotted with dinghies and there are wetlands beyond the beach – a haven for people and wildlife. At first glance, the beach looked reassuringly normal with happy families and surfers enjoying themselves as always. Yes, there was the odd bit of big plastic: a battered laundry basket, a broken packing pallet, a plastic bottle. National Trust beach volunteer Jeff was out picking litter as part of his daily routine. Still, nothing too bad, we thought.

It wasn’t until we got down on our knees and close up to the swathes of seaweed left behind by the tide that we started noticing hundreds of bits of small plastic: bottle tops, twine, netting, Styrofoam, balls of bubble warp, packaging and brightly coloured solid bits of plastic of all sizes. Our bags were filled after just 20 minutes of casual picking. Really disheartening. We found the nurdles on the second beach. One or two at first and then 70 or more within a 10 metre stretch of sand. We stopped looking after a few minutes because it was evident just how close to home this global problem is… I’ll let the pictures below do the talking.

I know of no other solution then to stop buying plastic and to support those who lobby governments and work with industry to reform and bring in alternatives as quickly as possible. 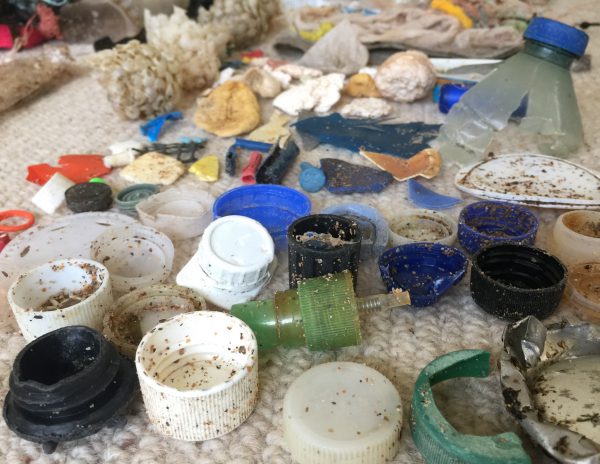 Plastic lids and debris found within minutes of beach combing 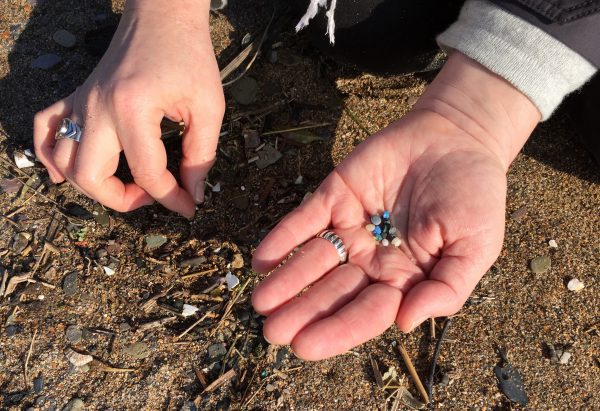 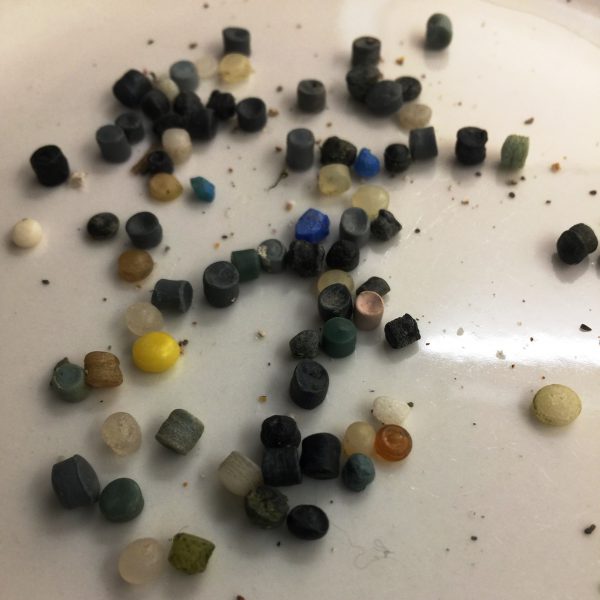 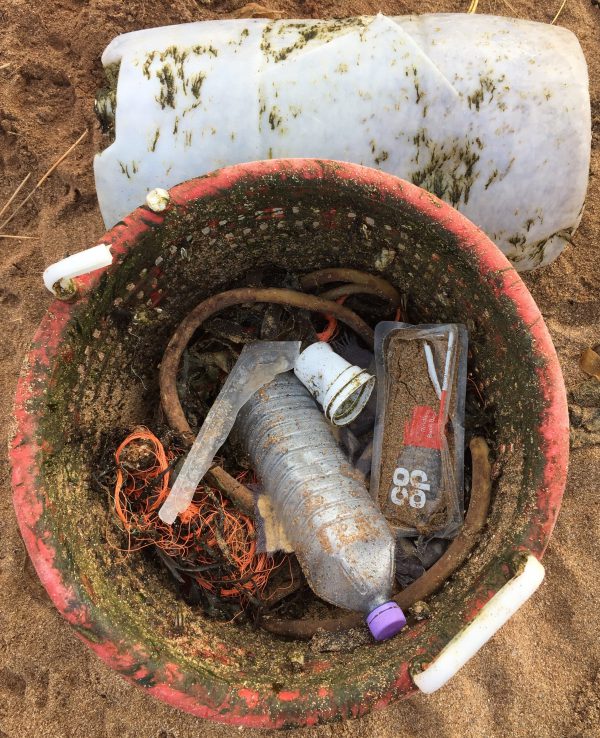 Everyday plastic items washed up on the beach 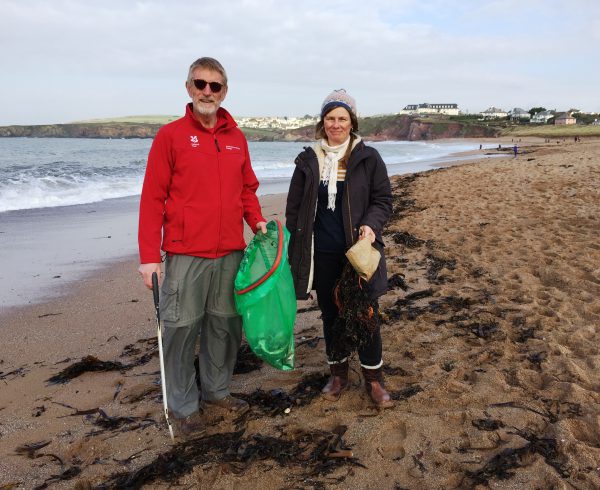