Plastic Proliferation Threatens the Climate on a Global Scale

Plastic & Climate: The Hidden Costs of a Plastic Planet is a new report by the Centre for International Environmental Law (CIEL). I highly recommend reading the executive summary, or indeed the entire report, which explains the relationship between plastic production/incineration and climate change. Plastic in the environment is one of the least studied sources of emissions—and a key missing piece from previous studies on plastic’s climate impacts.

Apocalyptic and hard hitting report from the Intergovernmental Panel on Climate Change (IPCC).

It’s the final call, say scientists, the most extensive warning yet on the risks of rising global temperatures. Their dramatic report on keeping that rise under 1.5 degrees C says the world is now completely off track, heading instead towards 3C.

Redefining Pollution and Action: The Matter of Plastics

Abstract: Using plastic pollution as a case study, this article shows how the material characteristics of objects – their density, their size, and the strength of their molecular bonds, among other traits – are central to their agency. The author argues that it is crucial to attend to the physical characteristics of matter if we, as researchers, are going to describe problems and contribute to solutions for ‘bad actors’ like pollutants. Plastics and their chemicals are challenging regulatory models of pollution, research methods, and modes of action because of their ubiquity, longevity, and scale of production. This article investigates how scientists researching plastic pollution are attempting to create a new model – or models – of pollution that account for the unpredictable and complex materialities of 21st-century pollutants, and how the Anthropocene has come to be a shorthand for our material understandings of moral transgressions, cherished boundaries, and good citizenship.

Max Liboiron is a feminist environmental scientist, science and technology studies (STS) scholar, and activist. As an Assistant Professor in Geography at Memorial University of Newfoundland, Liboiron directs Civic Laboratory for Environmental Action Research (CLEAR), a feminist, anti-colonial laboratory that specializes in grassroots environmental monitoring of marine plastic pollution. Liboiron’s STS work focuses on how invisible yet harmful emerging phenomena such as toxicants from marine plastics become apparent in science and activism, and how these methods of representation relate to action. Liboiron also runs Discard Studies, an interdisciplinary hub for research on waste and wasting. An in-progress manuscript builds on this related work to articulate pollution as a form of colonialism.

Below are three excellent and pertinent quotes from Annie Leonard’s book ‘Is Sustainability Still Possible’, published in 2013. You can read the whole chapter here:  Moving from Individual Change to Societal Change. Annie Leonard is the host and author of the Internet film and book, The Story of Stuff, and co-director of The Story of Stuff Project www.sustainabilitypossible.org

”If perfecting our everyday individual choices is not the answer to creating a sustainable society, what is? Clearly, much needs to change beyond the level of our individual actions. Society-wide, we need to implement new technologies, cultural norms, infrastructure, policies, and laws. Many of these already exist, so the problem is less about inventing new ways to do things than about building the political power to demand them.”

“…people concerned about transitioning to a sustainable society need to clearly and consistently link calls for individual action to bigger visions and bolder campaigns to ensure the individual first steps become on-ramps to making meaningful change.”

“The good news is that we have everything we need to make big change in the years ahead. We have model policies and laws. We have innovative green technologies to help with the transition. We have an informed and concerned public; millions and millions of people know there is a problem and want a better future. The only thing we are missing is widespread citizen action on the issues we already care about. As American author and activist Alice Walker says, “The most common way people give up their power is by thinking they don’t have any.” Our real power lies not in perfecting our ability to choose from items on a limited menu but in deciding what gets on that menu. Let’s ensure that all the options offered move us closer to sustainability and justice. That is the kind of change we need. And we can only get it by working together.”

Research Article on Production, Use and Fate of all Plastics Ever Made, 2017

The latest and most comprehensive academic report on global plastic production: Production, Use and Fate of all Plastics Ever Made. Headline statistics include:

United Nations Environment Programme (UNEP) reports on marine litter: Every year, the sum of humanity’s knowledge increases exponentially. And as we learn more, we also learn there is much we still don’t know. Plastic litter in our oceans is one area where we need to learn more, and we need to learn it quickly. That’s one of the main messages in Marine Litter Vital Graphics. Another important message is that we already know enough to take action.

The Marine Conservation Society (MCS) is a UK charity that work to ensure that the sea’s rich wildlife can be restored, fish stocks grow more plentiful, and our beaches and seawater become cleaner. Levels of beach litter have doubled over the last two decades. The September 2016 Great British Beach Clean organised by MCS saw just short of 6,000 volunteers clean 364 beaches around the UK and record the litter they found. Read the full Beach Clean 2016 report.

“The Society has a record of sustained achievement and deserves the wholehearted, passionate support of everyone who cares about our marine environment. Our special bond with our coastline and the sea, developed and nurtured over many generations, deserves nothing less.”  HRH The Prince of Wales (MCS President)

Read the report from the Department for Environment, Food and Rural Affairs on UK waste statistics here.

“Plastic wastes are rapidly accumulating in landfill and in natural habitats, especially the marine environment, where they create a potential hazard for wildlife. The full environmental impacts of plastic waste are not understood, but the United Nations Environment Programme (UNEP) estimates that marine plastic wastes cause the deaths of hundreds of thousands of aquatic vertebrates each year. These deaths result partly from entanglement or physical damage caused by macroplastics, but there are also concerns that ingested plastic fragments (microplastics) may block the digestive system and cause starvation. Furthermore, it is thought that persistent organic pollutants may partition to plastics and be transported into the food chain. To address these concerns laboratory exposures were conducted to assess the biological effects of ingested plastic particles.”

Where does the plastic in the oceans come from? June 2016 Report

Independent UK consultancy Eunomia who help organisations to achieve better environmental and commercial outcomes, published a report in June 2016 on where plastic in marine environments come from. You can download the report here. The report explains the information sources and analysis underlying Eunomia’s marine plastics infographic:

What does ‘biodegradable’ mean exactly?

Biodegradation is a bio-chemical process in which materials, with the help of micro-organisms, break down into natural elements (e.g. water, carbon dioxide, new biomass). The availability of oxygen determines which molecules the organic carbon is converted to (partly into carbon dioxide in the presence of oxygen, partly into methane without oxygen). There are schemes and standards to certify that a material biodegrades in a specific environment within a specified
timescale. However, this does not mean that such a material biodegrades in any environment
within a short timescale. Industrially compostable materials, for example, are biodegradable (i.e. they break down into natural elements with the help of micro-organisms) within the conditions and timescale specified in industrial composting standards. However, they do not biodegrade in home composting [lower temperature] conditions within the same timescale. Hence, the term ‘biodegradable’ is very broad and can easily be misinterpreted. As pointed out by European Bioplastics, ‘“biodegradable” by itself is not more informative than the adjective “tasty” used to advertise food products’.

Thanks Ellen MacArthur for the clear explanations! 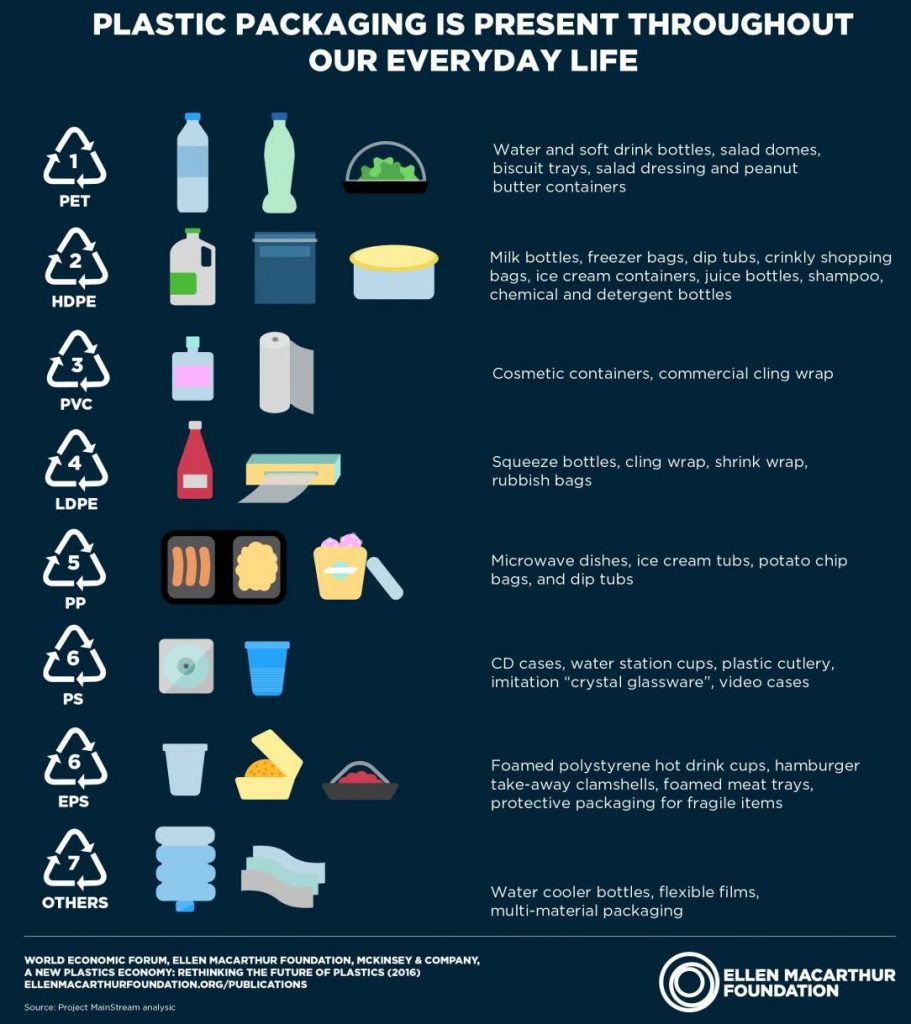 Beth Terry is an accountant from California who became an activist, author and public speaker after learning about the devastating effects of plastic polution and her own plastic footprint back in 2007. Her blog is a comprehensive resource on plastic-free living. Many of the wonderful sites and events she posts about are of course in the States but are nevertheless really informative. See her blog here.

Inspiring stuff from The Ellen MacArthur Foundation who work with business, government and academia to build a framework for an economy that is restorative and regenerative by design. “Applying circular economy principles to global plastic packaging flows could transform the plastics economy and drastically reduce negative externalities such as leakage into ocean.”

Ellen MacArthur is the UK solo long-distance yachtswoman who broke the world record for the fastest solo circumnavigation of the globe in 2005. If you have a bit of time to spare, this is an great and inspiring organisation with links to the lastest research papers.

The Plastic Bank is an organisation the makes plastic waste a currency to help the world’s most disadvantaged people. Founder David Katz says “I’ve come to realize that the problem with plastic waste, is that people see it as waste. But if we can reveal the value in plastic, we can make it too valuable to throw away. If we can reveal value in people, we can unleash the potential of the world’s most disadvantaged and give them a platform to improve their lives. That’s my vision. It’s a triple bottom line social enterprise (people, planet, profit).”

The Plasitc Bank is a partner in LUSH Cosmetics. In early 2015 The Plastic Bank launched its full operations in Haiti through Solar Powered Social Plastic Recycling Markets. Plans are now in place to expand this model globally. The website is full of interesting and awe-inspiring videos and also some shocking reality checks!

List of shops and products (online and local to Stroud)

This is my list of where to get things unpackaged and sympathetic online shops that will send items in non-plastic packaging: shops-and-products